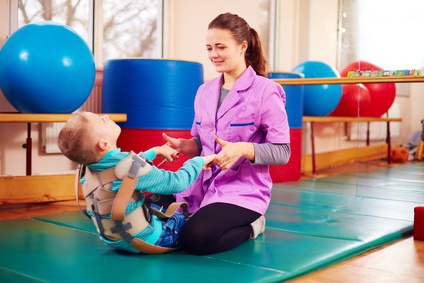 A new blood test may help identify a biomarker of a condition during pregnancy that can be a risk factor for cerebral palsy.

Intrauterine growth restriction (IUGR) is a condition during pregnancy where a baby does not grow as expected.

IUGR may be suggested if a fetus is below the 10th percentile for its gestational age. Babies can be suspected of IUGR during the prenatal period.  Measurements taken during pregnancy, such as the uterine fundal height, can indicate the fetus is small for its projected developmental age.

A new study published in The Turkish Journal of Pediatrics discusses measurement of a protein called Bcl-2 in maternal blood tests.  The protein is involved with a process called “apoptosis.”  Apoptosis is a usually normal process of cell death and replacement that provides biological maintenance.  Cells are created and replaced throughout our lifetimes.  Too much Bcl-2 may indicate this important process is off-kilter, deleting cells needed for growth.

IUGR has a number of risk factors which include:

Chromosomal abnormalities can lead to IUGR as can infectious agents like Rubella, Toxoplasmosis, and Syphilis.   Moms may also have risk factors for IUGR such as:

Babies may be small but may still be healthy.  However, IUGR is associated with stillbirth and premature babies.  Until after birth, a physician cannot definitively diagnose a baby with IUGR.

In the study, researchers note IUGR occurs in approximately five percent of pregnancies.  Babies suspected of IUGR are at higher risk of a host of long-term complications, including cerebral palsy.  In the research, scientists examined data from 159 late pre-term births along with mothers and babies in a research control group.  Within the pre-term babies, 80 were identified with IUGR.

In this study, researchers found that significantly higher levels of Bcl-2 were found in mother’s whose children experienced IUGR.

Study authors suggest that a blood test for Bcl-2 could be helpful when used along with ultrasound during the prenatal period to identify IUGR, even though the severity of the condition cannot be known until after birth.  As well, researchers note, “In addition, the results make us think that Bcl-2 may be used as a marker to assess fetal well-being regardless of IUGR.”

Schochor, Federico and Staton, P.A. delivers aggressive litigation services to individuals and families who suffer medical negligence.  Contact us today or call 410-234-1000 to schedule a free consultation to discuss your case.